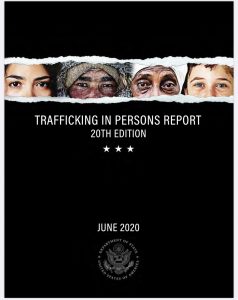 In our opinion, the 2020 Report does not sufficiently highlight NAPTIP’s ongoing efforts in the fight against human trafficking in Nigeria, particularly considering its limited resources, its overly broad mandate (including implementation of the Violence Against Persons Prohibition Act, 2015) and the prioritization of other matters to Nigeria’s government (including the considerable import of last year’s presidential election).  In addition, tremendous efforts are being made by local stakeholders in prevention and in the protection of victims and additional efforts are being made at joint collaboration between government and local stakeholders, as reflected by our Gap Analysis conducted in Benin City on June 10-11, 2019.  However, not enough of these efforts are highlighted by the Report, subjecting it to scrutiny by some over its overall relevance in the African context.  The Report also fails to highlight how foreign policies, globalization, the failure to sufficiently address demand by the West and the failure to consistently include Nigeria in designing interventions by international donors and governments all contribute to trafficking and/or fail to decrease anti-trafficking efforts within the country.  The complete country narrative can be viewed here.

According to the country narrative Executive Summary:

The Government of Nigeria does not fully meet the minimum standards for the elimination of trafficking but is making significant efforts to do so. These efforts included continuing efforts to train government officials and raise public awareness, collaborating with international organizations and NGOs to establish anti-trafficking task forces in Borno and Ekiti states, using new technologies to enhance collection of victim testimony, prosecuting three government officials complicit in human trafficking, and drafting memoranda of understanding (MOUs) to improve coordination between government agencies. However, the government did not demonstrate overall increasing efforts compared to the previous reporting period. Nigerian security forces recruited and used at least two children in support roles during the reporting period. In addition, there continued to be reports security officials sexually exploited, including through sex trafficking, IDPs in governmentrun camps in and around Maiduguri. The government did not hold criminally accountable any military officials for exploitation of IDPs in sex trafficking or recruitment and use of child soldiers. In addition, the government did not hold any Civilian Joint Task Force (CJTF) members criminally accountable for sex trafficking of IDPs or past recruitment and use of child soldiers. The Nigerian military did not always provide trafficking victim protections to female and child trafficking victims allegedly associated with insurgencies and the government convicted fewer traffickers. Therefore Nigeria was downgraded to Tier 2 Watch List.

The “Prioritized Recommendations” for Nigeria include:

Other highlights from the Report include:
Filed Under: The Naked Truth