US Department of State Releases Interim TIP Report (2018) on Nigeria 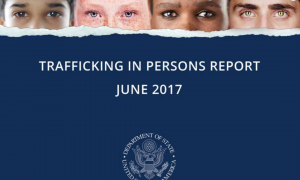 Every year, the United States’ Secretary of State submits an interim assessment report to Congress of countries which have been determined to require special scrutiny following the publication of the State Department’s annual Trafficking In Persons (TIP) Report.  The Report outlines any progress in government efforts to combat trafficking in persons in the six months following the release of the annual TIP report (which sets forth an in-depth analysis of each country’s trafficking problem and the government’s efforts to combat it).  In the 2017 Report, Nigeria was included as one of 47 countries placed on the Special Watch List, as it dropped from a ‘Tier 2’ ranking to ‘Tier 2 Watch List’.  Below is the State Department’s Interim Report on Nigeria.  Further details on the Interim Assessment of the 46 other countries can be viewed here.

***INTERIM REPORT FOR NIGERIA: Since the release of the 2017 TIP Report, the Government of Nigeria investigated, prosecuted, and convicted traffickers; the Borno State government signed as a witness and began to implement an action plan between the United Nations and the Civilian Joint Task Force (CJTF) to end CJTF’s recruitment and use of child soldiers; and officials collaborated with international organizations on anti-trafficking awareness campaigns in Internally Displaced Persons (IDP) camps. It did not, however, take steps to address reported use of children in support roles by elements of the Nigerian Army in isolated cases, investigate or prosecute any officials or non-government actors for alleged child soldiering offenses among the CJTF, or report prosecutions of any individuals for alleged sexual exploitation of IDPs.***

In summary, the Interim Report continues to highlight the alleged deficiencies in the Nigerian government’s efforts to combat trafficking.  It is noteworthy that following Nigeria’s probe into Human Rights Watch’s October 2016 report concerning the trafficking and abuse of women and girls at internally displaced persons’ camps, a counter human rights organisation known as Global Amnesty Watch, in December 2017, exonerated the Nigerian army of complicity in the alleged abuse.  This was notwithstanding the arrests of several armed forces officials made in December 2016.

Overall, our review and assessment reveals that beyond what is contained in the TIP Interim Report, further efforts are being made by Nigeria to tackle human trafficking, particularly sex trafficking from Edo State.  Such efforts include our Human Trafficking Workshop on behalf of the Edo State Government in May 2016 and our upcoming Roundtable (February 26th and 27th, 2018) on behalf of the Office of the Senate President of Nigeria.  Should Nigeria remain on its current ‘Tier 2 Watch’ ranking for an additional consecutive two years, it will be automatically downgraded to Tier 3, the lowest ranking.  However, in light of ongoing efforts, we are hopeful that Nigeria will advance to Tier 2 when the 2018 TIP Report is released later this year.