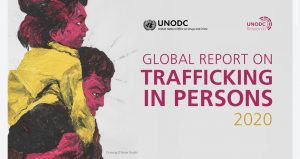 GENEVA- FEBRUARY 2, 2021.  Today, the United Nations Office on Drugs and Crime released its 2020 Global Report on Trafficking in Persons.  The Report, which is produced every 2 years, culls government reported figures from 148 countries worldwide and provides four thematic chapters: Chapter 2 (examines how poor socioeconomic conditions are used by traffickers to recruit and exploit victims); Chapter 3 (expands on patterns of child trafficking and the roles that extreme poverty, social norms and familial backgrounds play in this form of trafficking); Chapter 4 (focuses on trafficking for forced labour and explores the specific economic sectors that are more vulnerable to trafficking); and Chapter 5 (presents emerging patterns on internet technologies that are used by traffickers to facilitate recruitment and exploitation).

This particular 2020 Report contains information from 2016 to 2018, prior to the onset of the COVID-19 global pandemic, which is discussed in a dedicated chapter.  According to the Report, it is anticipated that like prior pandemics, this one will result in a direct increase in trafficking due to economic recessions coupled with advances in internet based technology (particularly social media-for recruitment and advertising of human beings and organs- and video/live streaming services). The Report notes that two primary strategies are employed: (i) hunting, where traffickers proactively approach victims or potential customers; and (ii) fishing, where advertisements are placed online and traffickers await potential victims and customers. More specifically, trafficking is expected to increase from poor countries to countries that are having an easier time recovering from the pandemic.

In general, the Report confirms ongoing trends that we have previously reported and confirms some of our own findings in our more recent September 2020 ‘Pathway to Prevention’ Report on Recruiters of Sex Trafficking from Oredo LGA in Benin City, Edo State, Nigeria, i.e., that women and girls continue to represent the largest number of victims worldwide (almost 50%) and that trafficking is mostly economically driven.  There has also been an increase in the number of children (now represent over 30%) being trafficked (particularly boys who saw a 5-fold increase). Most trafficking globally continues to be for commercial sexual exploitation (now 50%- a decrease from 80% in 2006), followed by forced labour (38%).

Overall, global trafficking convictions have been on the rise since 2003. Although they still remain low (in comparison to the number of trafficking victims reported), it appears that convictions outside of Europe and Central Asia (which historically represent the global highest number of convictions) are increasing- which may suggest that other areas such as South East Asia and Africa are more focused on increasing prosecutions. In general, more men are convicted of trafficking crimes (62%) than women (38%).  In countries of origin, most offenders who are convicted are country nationals.  On the contrary, in destination countries, a little over half of those convicted are foreigners.

Organized business enterprises, whose core activity is trafficking, conduct 57% of trafficking globally, while governance-type organized crime groups (such as the mafia) (where trafficking may not be their sole criminal activity) conduct approximately 18% of global trafficking.  Non-organized criminal operations (individual traffickers/opportunistic traffickers) conduct approximately 25% of trafficking globally.  (It is noteworthy that in our Pathway to Prevention research-referenced above- we found that recruiting in Oredo LGA is mostly conducted by disaggregated recruiting networks, many of who consider themselves and are considered by the community as “Helpers”.)

With regards to Nigeria, UNODC country representative, Oliver Stolpe, noted during today’s Report launch that the Report was particularly timely for Nigeria, as the country is in the process of drafting a new National Action Plan Against TIP.  It assists the UNODC’s efforts in setting and resetting priorities, particularly since Nigerian women continue to represent the largest group of trafficked victims in Europe. He referenced potentially increasing the number of Nigerian liaison magistrates overseas, an effort that the UNODC has recently supported. In addition to fully understanding criminal networks, more effort should be made towards increasing forensic evidence, as opposed to solely relying on victim testimony, Mr. Stolpe noted.

Because the Report analyzes data culled from 2016-2018, it cannot necessarily be considered the most useful, considering the considerable passage of time and recent developments in trends, the import of the COVID-19 pandemic, etc. As such, it is imperative that stakeholders continue to secure real time intelligence from those with lived experience, i.e., survivors, returnees, recruiters and traffickers, as they are the most credible messengers.

Filed Under: Blog, The Naked Truth, What You Should Know