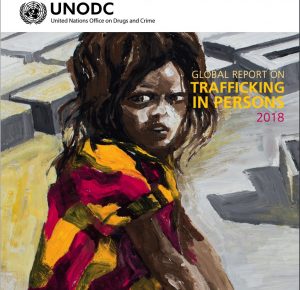 A United Nations Office on Drugs and Crime Report published on January 7, 2019 confirms that the global trend reveals a steady increase in the number of victims of human trafficking since 2010.  There has also been an increase in the number of trafficking convictions globally, likely due to better detecting and reporting mechanisms. Drawing from data from 142 countries which examines global trafficking trends and patterns, the UNODC’s Executive Director, Yury Fedotov, concluded that “human trafficking has taken on horrific dimensions,” with women and girls continuing to bear the brunt of these atrocities.

According to the Report, women and girls continue to account for the overwhelming majority of trafficking victims worldwide, with almost 75% of them being trafficked for sexual exploitation, while 35% of them are trafficked for forced labour.

In addition, sex slavery is also increasingly used, as rape has been, as a weapon of war, with armed groups and terrorists abducting women and girls and forcing them into marriages with new fighters (who are incentivized to join their respective causes).

The Report also finds that almost 33% (one third) of all global trafficking victims are children, representing a 5% increase from the Global Slavery Index’s 25% estimate in 2018.

In addition, the Report notes that although there has been an increase in trafficking convictions in Sub-Saharan African, weak institutions and impunity continue to allow trafficking to proliferate, as conviction rates in the region remain extremely low.

Other findings from the study include: