The Naked Truth About Sex Trafficking! 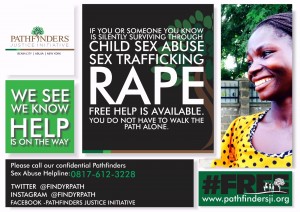 Sex trafficking is defined by the United Nations as the recruitment, transportation, transfer, harboring, or receipt of persons by improper means (such as force, abduction, fraud, or coercion) for the purpose of sexual exploitation.  Around the world, over 20 million people are trapped in modern day slavery, which is often accompanied by debt bondage.  The overwhelming majority of these are women and girls.

In many countries in West Africa, particularly Nigeria which houses the hub of sex trafficking in the region (Edo State), the toxic combination of poverty, minimal education and little to no economic opportunities often force young women to volunteer to be trafficked into Europe in the hopes of a better life.  These factors cause women to view prostitution as an alternative to poverty.  Here are the top five reasons, based on our own research and experience, why this is ultimately a bad decision.

1.Because the chances are high that a sex trafficking victim will die.

In light of the high demand for fresh human organs, more and more traffickers are killing their recruits along the way to the destination country.  According to the World Health Organization, an estimated 10,000 black market operations involving purchased human organs are conducted annually.  Organ trafficking is on the rise, as traffickers can make up to $1.5 million for a fresh human heart on the black market.  Another form of trafficking that is currently under investigation is “diya.”   It is a form of trafficking that takes place in the northern part of Nigeria and involves the luring of young children to Saudi Arabia, where they are killed for blood money known as “diya”.  The method is quite simple: the trafficker, often female, trafficks a child to Saudi Arabia to go “shopping.“  As soon as the trafficker spots what she believes to be an affluent Arab’s car, the child is pushed in the path of the car in the hopes that he/she will be killed.  If the child is killed, there are two potential penalties for the driver.  The first is the death penalty; the second is the offering of compensation to the relatives of the dead.  The trafficker opts for the second, obtains an average of $27,000 and informs the child’s family that the child died of natural causes.

2. Because the tale of financial success is a bold faced lie.

Most trafficking victims are deceived by the tale that once they arrive the destination country, they will be financially secure enough to support their families back home.  The reality is that once a trafficking recruit arrives in the destination country, they are stripped of their passports, telephones and any legal means of which they can make a living.  They are informed by their Madams (usually former trafficking victims themselves) that they owe upwards of $50,000 and are forced into prostitution as the only way of paying back the debt.  If they refuse, they are threatened and beaten.  Without any recourse, they are trapped in modern day slavery and debt bondage.  Victims are forced to work unsustainable shifts within which they are forced to sleep with anywhere from 5-10 men a day, every day, for $15-$20 per encounter. Victims are not paid for their work (financial abuse) and they do not own their own bodies.  All monies are remitted to their Madams.  Because of debt bondage, they never send any funds home to support their eager families and they have no freedom to work on their own terms.  Once they escape or are freed, they return to Nigeria empty handed.

3.Because victims are physically abused.

Every single one of our survivors tell us that they were physically abused.  Many are forced into drugs and are often beaten, repeatedly raped and starved in order to force them to stay in line.  Several of our survivors have been thrown out of varying storey buildings and have sustained life threatening injuries.  Others are HIV+ and are living with varying infections and diseases.

4.Because victims are emotionally abused.

In addition, our survivors tell us that they suffer emotional abuse at the hands of their traffickers.  They are forced to watch other victims tortured and raped and told that either themselves or their family members will be tortured and killed if they do not cooperate.  Many survivors subsequently live with depression, nightmares and various forms of mental illness as a result of their captivity.  Psychologically, they are never the same.

5.Because sex trafficking is a crime.

In the event that you choose to participate in recruiting another person into sex trafficking and are convicted, prison terms vary from 10 years to life imprisonment (Nigeria).

Filed Under: Blog, The Naked Truth, What You Should Know