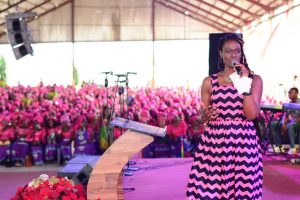 BENIN CITY, EDO STATE- on August 8, 2018, Pathfinders’ R. Evon Idahosa spoke at CWFI’s annual women’s convention, which gathers between 20,000-35,000 women annually in Benin City, Edo State.  Taking the stage, Ms. Idahosa informed the 25,000+ young women and mothers in the crowd about the dangers of sex trafficking and irregular migration. She discussed the dangerous reality of sex trafficking overseas, particularly when it is undertaken by land through Niger, the cemetery that is the Sahara Desert, the hell that is Libya and the graveyard that is the Mediterranean Sea. Pathfinders also distributed hundreds of our “All Na Wayo” awareness raising postcards, which outline the dangers of human trafficking and the most common tactics used by recruiters and traffickers.  Young women were urged to contact Pathfinders if they are seeking viable alternatives to poverty, one of the primary factors that causes vulnerability to sex trafficking in Nigeria.  Ms. Idahosa’s appearance at the annual women’s convention compliments Pathfinders’ ongoing awareness raising efforts, which include a daily radio reach to over 1,000,000 Nigerians in four states, regular television appearances, workshops as well as its weekly grassroots outreach efforts to local schools, markets, churches, etc. To support our efforts, please email info@pathfindersji.org. You can watch a short video here. 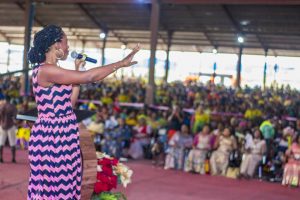 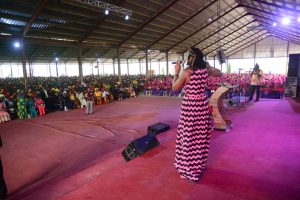 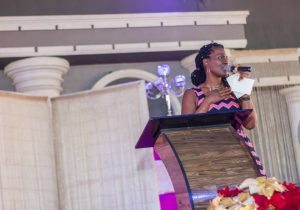 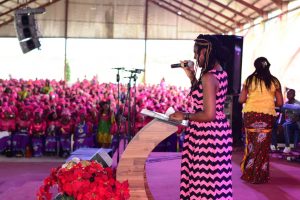