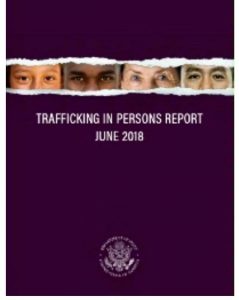 JUNE 28, 2018- For the second year in a row, Nigeria has received a ‘Tier 2 Watchlist’ placement on the United State’s Department of State 2018 Trafficking In Persons (TIP) Report, which was released today.  The TIP Report ranks countries in tiers based on their government’s efforts to fight human trafficking.

As a Tier 2 Watchlist Country, Nigeria is considered among countries whose governments do not fully meet the Trafficking Victim Protection Act’s (TVPA) minimum standards, but are making significant efforts to bring themselves into compliance with those standards and: (a) the absolute number of victims of severe forms of trafficking is very significant or is significantly increasing; (b) there is a failure to provide evidence of increasing efforts to combat severe forms of trafficking in persons from the previous year; or (c) the determination that a country is making significant efforts to bring itself into compliance with minimum standards was based on commitments by the country to take additional future steps over the next year.

According to the Report, Nigeria, which in 2011 was ranked a Tier 1 Country (highest tier), received the repeat Tier 2 Watchlist Placement primarily due to: (1) its alleged government complicity relating to human trafficking offenses and failure to prosecute offenders; (2) its continued coordination with the Civilian Joint Task Force (CJTF), a non-governmental self-defense militia that allegedly recruited and used children as child soldiers in the fight against the Boko Haram insurgency; (3) its failure to report, investigate, prosecute or convict any party—including of any government official—for child soldiering offenses;(4) the alleged continued sexual exploitation of women and girls displaced by Boko Haram and the Islamic State-West Africa (ISIS-WA) by government officials and the CJTF; and (5) the Nigerian military’s alleged continued inappropriate detention, arrest, interrogation and failure to protect female and child trafficking victims for alleged association with the insurgencies.

“Ensure the Nigerian military has ceased unlawful use of children, including in collaboration with CJTF, and investigate any reports of military personnel’s use of children; work with CJTF and the UN to implement fully the child soldier action plan to remove all children from CJTF’s ranks and, if it is not, cut provision of financial and in-kind support to CJTF; vigorously investigate, prosecute, and convict traffickers— including complicit officials, those who recruit and use child soldiers and sexually exploit IDPs, and labor traffickers, including those who force children to beg—and impose sufficiently stringent sentences involving imprisonment; expand existing efforts to identify trafficking victims among IDPs, investigate cases, and implement preventative measures; release those suspected child ex-combatants and women who are inappropriately detained, screen for trafficking among those detained, and provide appropriate care; further increase funding for NAPTIP, particularly to provide adequate victim care; increase investigations into forced begging in Quranic schools; finalize the draft protocol to hand children identified in armed conflict over to civilian authorities; implement programs for the disarmament, demobilization, and reintegration (DDR) of child ex-combatants that take into account their specific needs, and work with the Nigerian military and CJTF to implement these plans; increase training for judges on the 2015 law, specifically the provision prohibiting the issuance of fines in lieu of imprisonment; allow trafficking victims to obtain employment and move freely in and out of NAPTIP shelters; expand ongoing police and immigration training to include identifying trafficking victims among vulnerable populations, such as women in prostitution and young females traveling with non-family members; increase the capacity of Nigerian embassies to identify and provide assistance to victims abroad, including by providing replacement travel or identity documents free of charge; and provide pre-departure information for migrants on how to find assistance if exploited abroad.”

Should Nigeria remain on this list for an additional year, Nigeria will be automatically downgraded to Tier 3, the lowest tier.

You can read the Report here: https://www.state.gov/documents/organization/282803.pdf