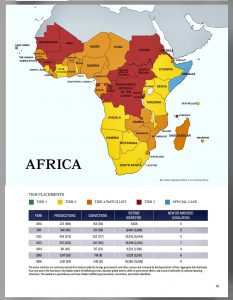 According to the Report, Nigeria was downgraded to a lower Tier Placement primarily due to: (1) its alleged financial and in-kind support of armed groups which recruit and use children in the fight against the Boko Haram insurgency (an allegation that Nigeria denies); (2) claims regarding the exploitation of women and girls in internally displaced persons camps (forcing them to provide commercial sex acts in exchange for food) by government officials (including military, police and federal and state officials); (3) waning efforts in investigating, prosecuting, and convicting traffickers; (4) decreased funding of its anti-trafficking agency, NAPTIP.

“Cease NSF elements’ use of children; cease provision of financial and in-kind support to armed groups that recruit and use children; vigorously investigate, prosecute, and convict traffickers—including complicit officials, labor traffickers, and those who recruit and use child soldiers—and impose sufficiently stringent sentences; cease detaining former confirmed or suspected child soldiers, and ensure such children are not penalized for crimes committed as a result of being subjected to trafficking; implement programs for the disarmament, demobilization, and reintegration of former child combatants that take into account the specific needs of child ex-combatants, and work with NSF and CJTF to implement these plans; increase funding for NAPTIP, particularly to provide adequate victim care; continue efforts to provide regular training to police and immigration officials to identify trafficking victims and screen for trafficking among vulnerable populations; provide pre-departure information for migrants on how to find assistance if exploited abroad; expand ongoing police and immigration training to include identifying trafficking victims among vulnerable populations, such as women in prostitution and young females traveling with non-family members; increase efforts to identify trafficking victims among IDPs, investigate cases, and implement preventive measures; increase efforts to investigate allegations of child forced begging in Quranic schools; continue to integrate anti-trafficking responsibilities into the work of other law enforcement agencies, especially the Nigerian police force; fully integrate anti-trafficking responsibilities in the work of the Ministry of Labor; and increase the capacity of Nigerian embassies to identify and provide assistance to victims abroad, including by implementing a mechanism that allows embassies to reissue passports to trafficking victims who lack identity documents.”

We need all hands on deck to get Nigeria back to a Tier 1 country, like she was a few years ago (2011). It is possible! #Not4Sale #EndHumanTrafficking

The entire report can be viewed here: https://www.state.gov/j/tip/rls/tiprpt/2017/