SEPTEMBER, 2022. The 2021 global estimates on modern slavery (comprised of both forced labour and forced marriage) published by the Walk Free Foundation, International labour Organisation (ILO) and International Organisation for Migration (IOM) reveals that approximately 50 million people are in situations of modern slavery on any given day.  Modern slavery, which the report defines as “situations of exploitation that a person cannot refuse or cannot leave because of threats, violence, deception, abuse of power or other forms of coercion” has seen an increase since the last 2018 Global Report, with situations of forced labour accounting for 27.6 million, while situations of forced marriage account for 22 million. By implication, one person in every 150 persons in the world is enslaved in one way or the other.

Notably, the global estimate reveals that forced marriage intersects with migration and human trafficking. Undocumented migrants are more likely to be affected by modern slavery because they are unprotected by the law. Most of them remain vulnerable “due to language and cultural barriers, lack of reliable information and support networks, challenges of economic and social integration, lack of access to basic services and social security”.

The global estimates reveal that modern slavery remains on the rise because “millions more men, women, and children have been forced to work or marry in the period since the previous estimates were released in 2017.” Thus, the report describes modern slavery as “the antithesis of social justice and sustainable development”. Despite the adoption of the Sustainable Development Goals (SDGs) 2030, modern slavery remains a global challenge, and current estimates make it difficult to believe that the world will meet this expected target within the time frame. The report asserts that factors like the COVID-19 pandemic, armed conflicts and climate change have increased susceptibility to all forms of modern slavery.

The global estimates are based on a jointly developed methodology by Walk Free Foundation, ILO and IOM. Calculations are derived from multiple data sources, as no single source was sufficiently reliable. The principal sources are data from nationally representative household surveys – 68 forced labour surveys and 75 forced marriage surveys – jointly conducted by ILO and Walk Free, as well as the Counter Trafficking Data Collaborative (CTDC) anonymised case dataset on victims of trafficking collected by IOM and its partners in the process of providing protection and assistance services to trafficked persons.

Considering the gender dimension of forced labour, females bear the brunt, as nearly four in every five people trapped in these situations are girls or women. A total of 3.3 million children are in situations of forced labour, accounting for about 12 percent of all those in forced labour. The report urges immediate action to save endangered children, stating that this is only the tip of the iceberg (based on available data), and that there may be more children in danger. Another reason for the call to action is that eliminating child labour is a target of the SDG which ought to be met by 2025. Additionally, the report reveals that some of the worst abuses of children under forced labour conditions occur in situations of armed conflict, with Nigeria listed amongst the affected countries (as indicated by the 2020 UN Security Council report by the Secretary-General: Children and Armed Conflict in Nigeria).

The global report estimates a 6.6 million increase in the number of people living in a forced marriage between 2016 and 2021, which amounts to a rise in prevalence from 2.1 to 2.8 persons per thousand people. Looking at the gender dimension of forced marriage, the report notes that although some males are affected by the practice, women are worst hit, with about 14.9 million of victims being women and girls.

Hence, the report calls for a holistic approach to eradicating modern slavery; where all stakeholders (social partners, participants in the social and solidarity economy, businesses, investors, survivor groups, civil society, UN agencies, other multilateral and bilateral organizations, international non-governmental organizations) come together in a global community dialogue to pave the way forward to proffering sustainable solutions to ending the scourge. 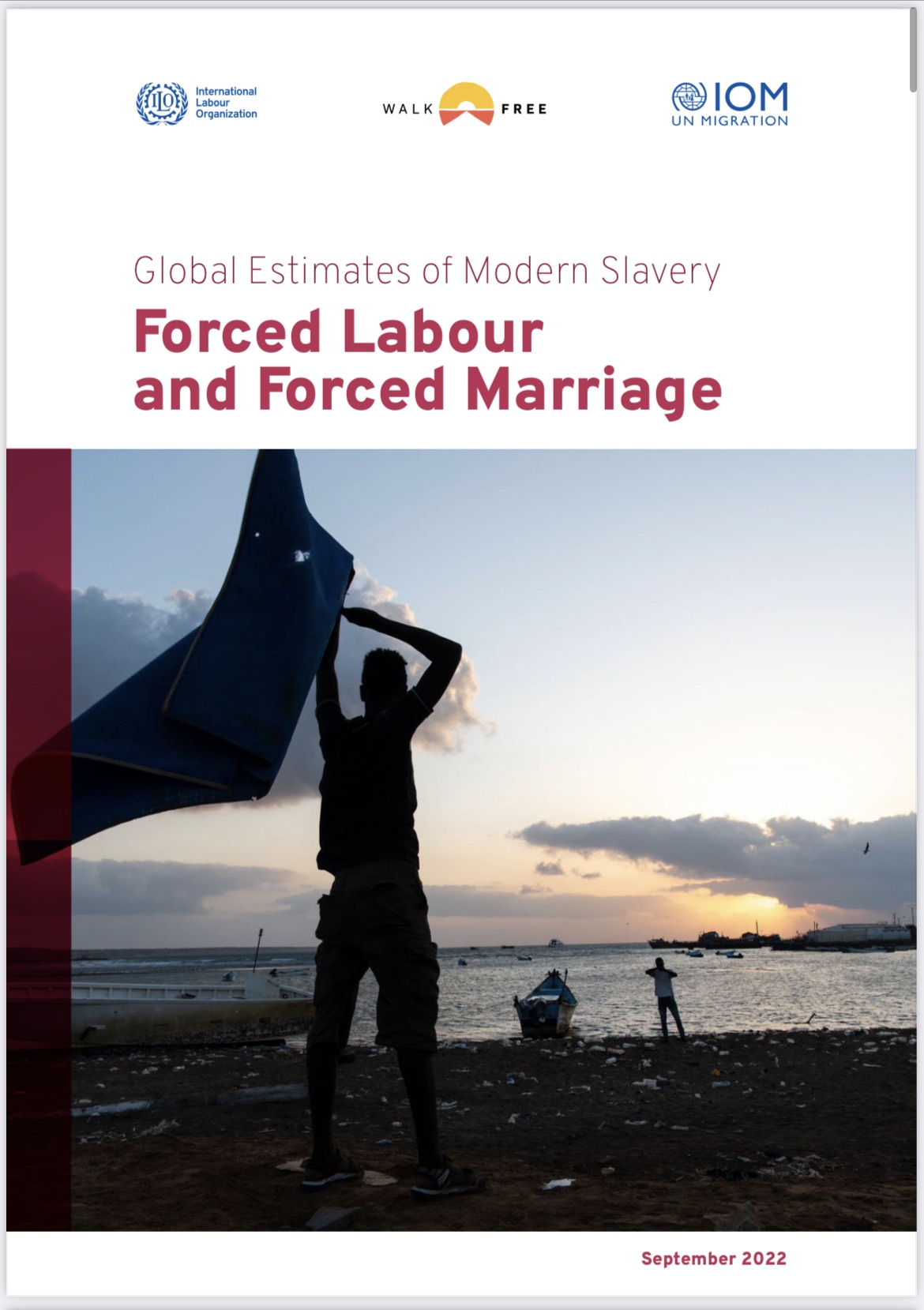 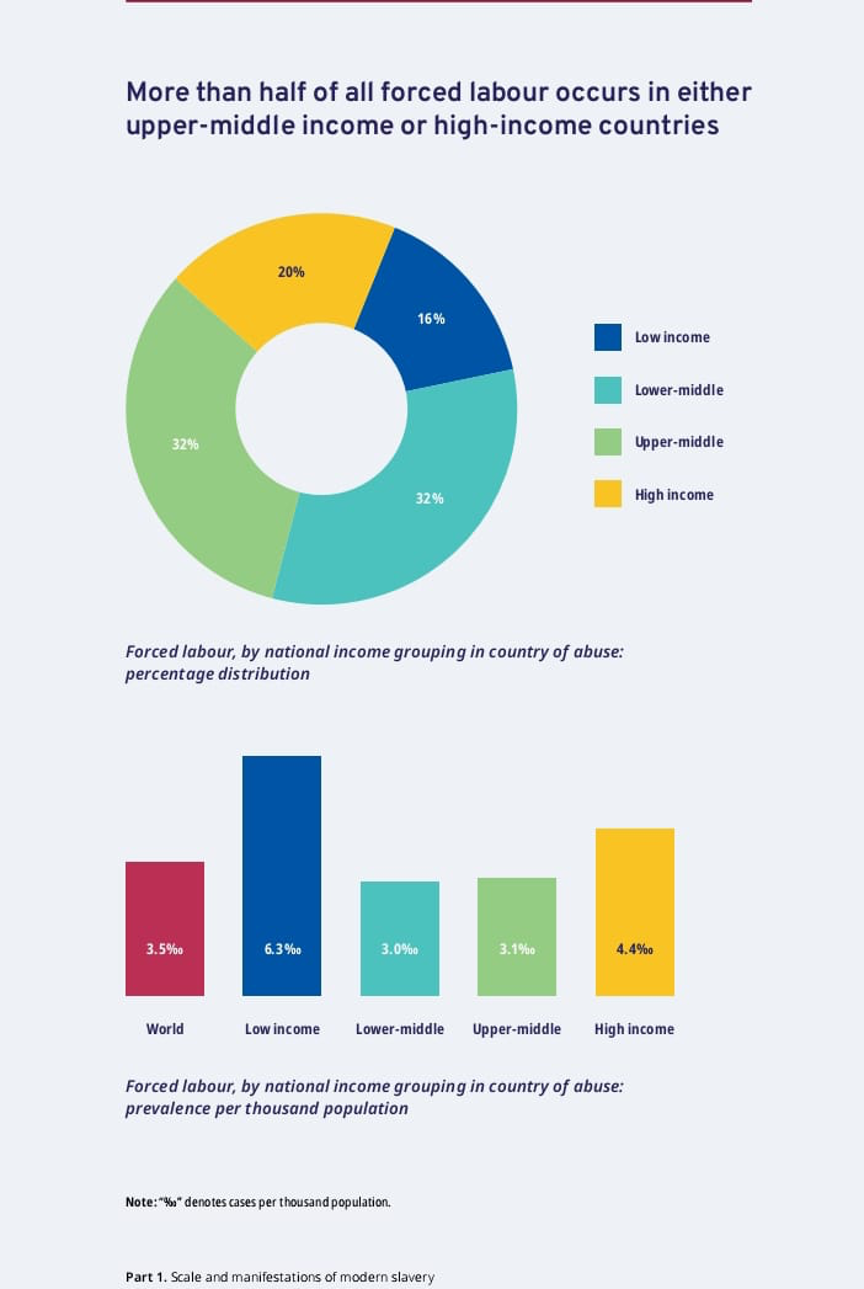 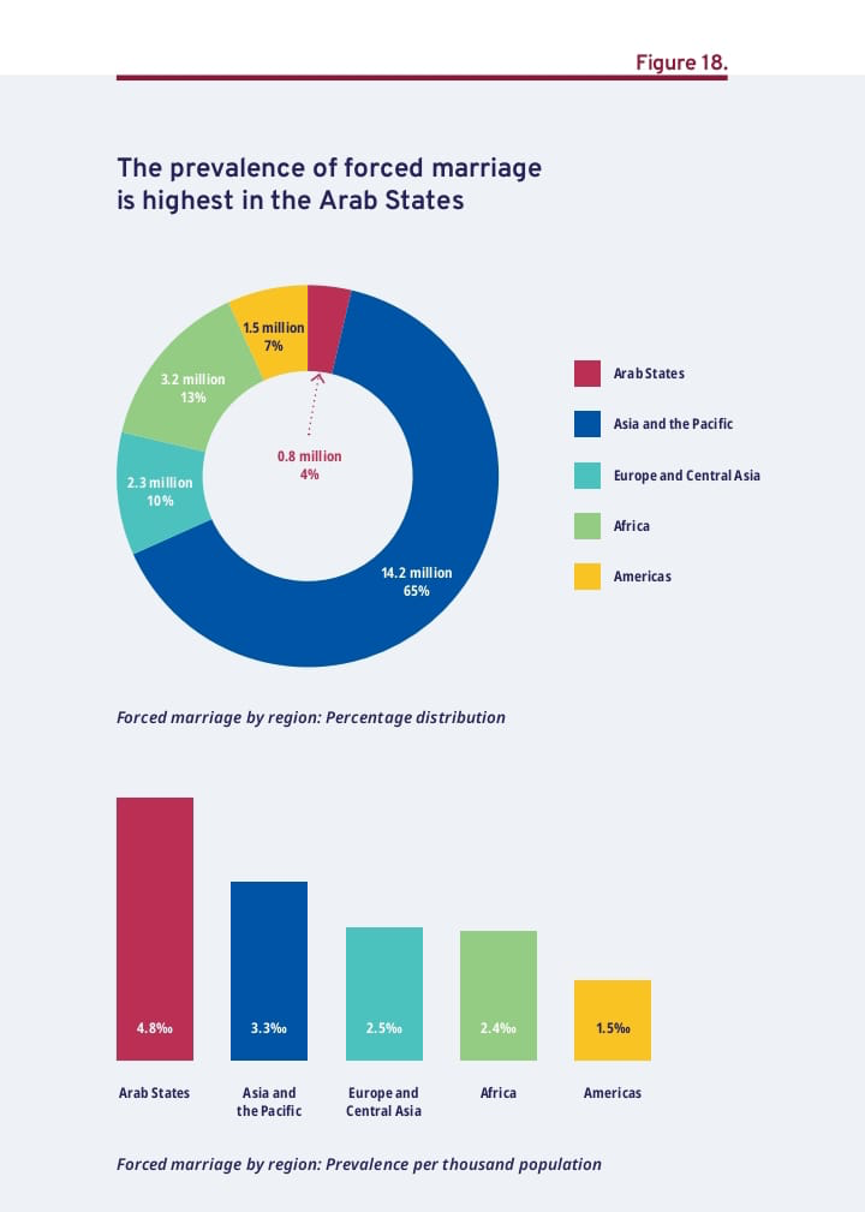 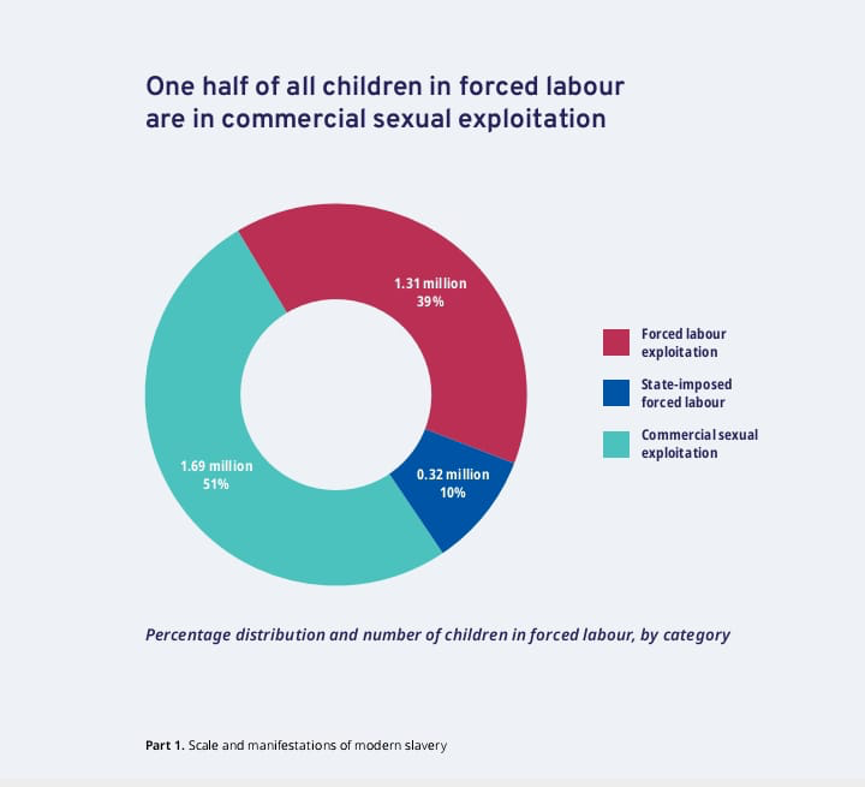 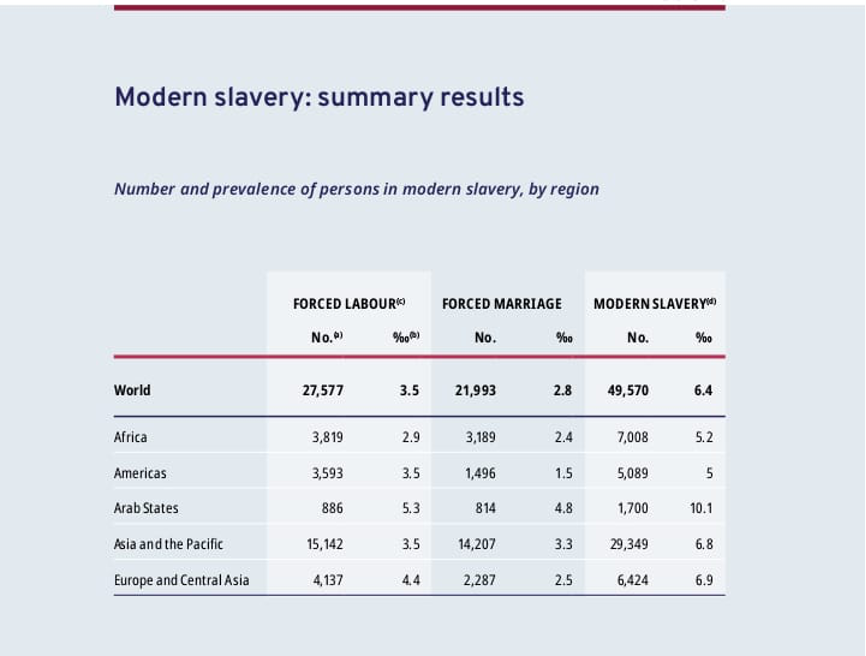 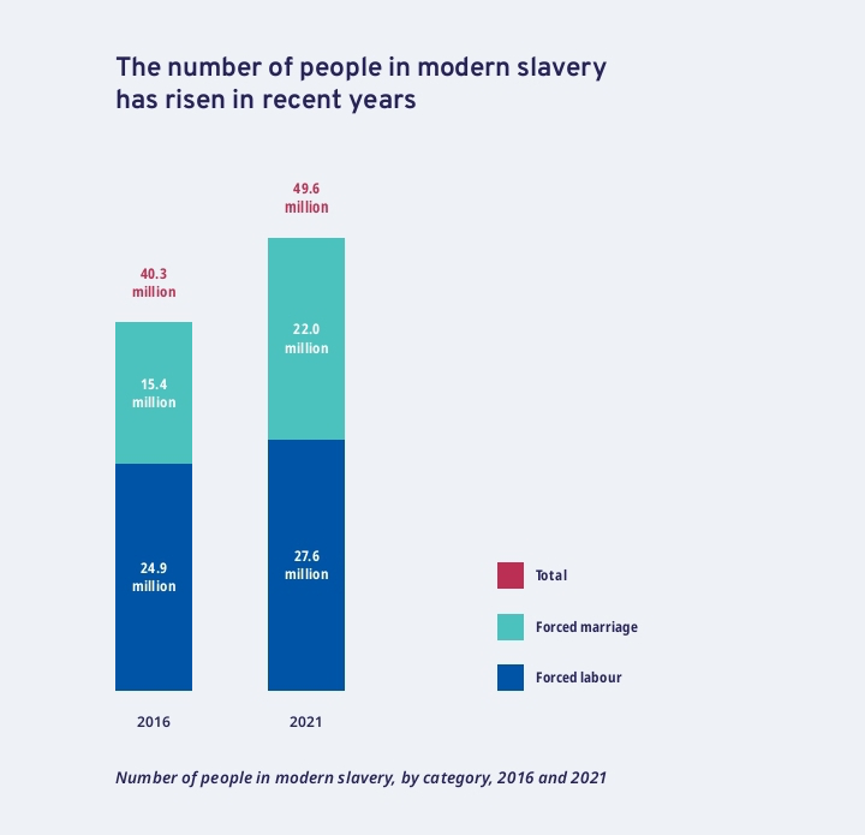