Justice Requires Both Compassion and Activism 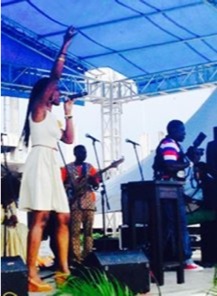 LAGOS, NIGERIA – June 27, 2014. Anyone who is from Nigeria knows that putting all our complications aside, there is no place like home. As I take my first few steps off the Boeing 777 and breathe in the early morning air in Lagos, I can’t help but acknowledge the stark dissimilarity between the purpose of my most recent visit to my beloved homeland in March 2014 and this journey. The former was to celebrate a milestone birthday and the latter, to join my voice with thousands of mothers in prayer for the safe return of almost three hundred 12-18 year old schoolgirls abducted by a terrorist group on April 14, 2014.

As an attorney and activist, I was outraged to hear the news of the abduction in the early hours of April 15th. Almost three hundred school girls, stolen from their lives by an extremist terrorist group in Chibok, Borno State, Nigeria. But as a mother of a beautiful eight-year-old girl, my heart immediately sank. The news became even more devastating when the leader of this group, which has wreaked havoc in North-East Nigeria since 2009, brazenly declared a few weeks later that the trafficked girls would be treated as sex slaves and sold pursuant to Allah’s mandate.

As the hours turned to days, the days to weeks and the weeks to months, we repeatedly rallied in New York, urging the Nigerian government and the international community to #BringBackOurGirls. Two months later, more weapons of war cloaked as women and girls were stolen by the same group and there was no apparent evidence to support the liberation of the original #Chibok276. Any sense of urgency seemed to dissipate with the dwindling hope of the mothers and fathers whose desperate faces reflected diseased souls.

The June 28, 2014 inter-faith/inter-denominational prayer rally was the first of its kind in Nigeria. Never before had the spiritual matriarchs of Nigeria, led by Archbishop Margaret Benson-Idahosa, collectively gathered to raise their voices for one cause, i.e., #CareForOurGirls. Themed “Return, Restore, Rebuild,” the “Mothers Cry” Prayer Rally was fueled by compassion for the devastated families of the abducted #ChibokGirls and rehabilitation efforts for the few girls that were fortunate enough to have escaped what they described as a living hell. Indeed, the stories they relayed described atrocities that no mother would ever wish upon their adolescent daughter.

Along with rising prayers, hope was awakened for some and renewed for others, as thousands of mothers gathered in Tafawa Balewa Square in Lagos and desperately cried out to God. Their tears, screams and unintelligible groans called on God to restore broken hearts, broken dreams and fragmented lives. Words of thanksgiving were expressed in faith, as expectant hearts opted to be propelled by hope rather than fear and devastation. I left with a renewed sense that all will be well.

A few days later, I flew to the nation’s capital, Abuja, where just a week before, a bomb had been detonated at a busy shopping mall by Boko Haram militants in an effort to reiterate the fact that the insurgency had yet to be quieted. Again, innocent lives were utilized as pawns and weapons of war in a twisted game that they never signed up to play. Despite what was intended to be a disarming police presence, it was evident that fear, ironically coupled with vigilance, permeated the thick Abuja air.

In a show of solidarity, I attended the #BringBackOurGirls-Abuja Coalition daily sit out at Unity Fountain where I was met with hopeful excitement over my few words of encouragement to fellow activists who, for over sixty days, had gathered daily to send the same message to the Nigerian government: #ChibokGirls must be brought back NOW and ALIVE! Unfortunately, the daily sit outs continue, as the #ChibokGirls have yet to be rescued, notwithstanding the government’s assurances that it is doing everything possible to secure their release.

Ultimately, the trip reinforced a truth that I already knew, i.e., that justice demands both compassion (#CareForOurGirls) and activism (#BringBackOurGirls). Because at the end of the day, what we all want is peace in this tattered and torn world. But there won’t be peace until there is justice. And there won’t be justice until there is an acknowledgement of the fact that women and girls are Image Bearers who hold the same value as their male counterparts.

What I genuinely want the West to appreciate is the fact that this fight goes beyond whether or not girls have the right to be educated in schools. It permeates into the warped mindset, into the antediluvian thinking and belief that women are less valuable than men and thus, should be subjugated and disrespected. It is that mindset, that inequality of thought, that needs to be re-evaluated and condemned. Because it may be education today, but tomorrow it will be manifested in labor laws which justify and perpetuate unequal pay and/or as doors which are rudely slammed in the faces of courageous women who attempt to grace the political stage with their presence.

Although I board my return flight a week later considerably more hopeful that the #ChibokGirls will be rescued, I can’t help but to ponder the stark disparity between the daily realities of the life I am leaving and the one I am heading back to in New York. My prayer indeed aligns itself with Blaise Pascal’s sentiment that “justice and power must be brought together so that whatever is just may be powerful and whatever is powerful, just.” May this sentiment echo in harmony throughout our broken world, including Chibok, Nigeria, because there is no place like home…