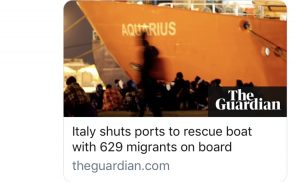 SICILY, ITALY- Aquarius, Doctors Without Borders’ (MSF) Mediterranean rescue ship, carrying more than 600 rescued migrants from Eritrea, Nigeria, Ghana and Sudan (including 123 unaccompanied minors and seven pregnant women), was stranded on the Mediterranean Sea on Monday, June 11, 2018, following Italy’s new populist government’s decision to close its ports on Sunday, June 10, 2018.  According to Italy’s Interior Minister and leader of the anti-immigration League Party, Matteo Salvini, “the good times for illegals are over,” as he urged Italy to “close the ports,” as part of his pledge to “stop the filthy business of illegal immigration,” a platform on which he successfully campaigned.  According to Mr. Salvini on Twitter, “Italy is done bending over backwards and obeying- this time THERE IS SOMEONE WHO SAYS NO,” adding the hashtag #closethedoors.”

Italy urged Malta to take in the migrants, many of whom are sick and in desperate need of medical treatment, on the Aquarius.  Malta refused, contending that Italy has broken international rules and that the ship falls under Italy’s jurisdiction.  Both the UN’s Refugee Agency and the European Union’s calls to an end to the standoff were to no avail.  However, Spain’s Prime Minister, Pedro Sanchez, has confirmed (as at the time of this blog post) that Spain will provide “safe harbour” to the Aquarius and to all 629 people on board so as to avoid a humanitarian catastrophe and “to comply with our human rights obligations.”

In response to Spain’s decision, Mr. Salvini tweeted: “Victory! 629 immigrants aboard the Aquarius ship [are heading] in the direction of Spain, first goal achieved.” Experts and NGOs anticipate a mass deportation of irregular migrants in Italy in the weeks and months to come.  This, notwithstanding the fact that 41.8% of migrants arriving into Italy receive some form of protection and maintain a legal right to remain in Italy under Italian law (as of December 2017). Italy’s message is loud and clear: we are criminalizing migration and migrants are no longer welcome.