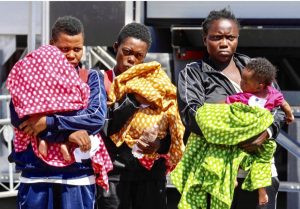 GENEVA, SWITZERLAND- on January 3, 2020, the International Organization for Migration (IOM), via its Missing Migrants Project, reported that 110,669 migrants and refugees entered Europe by sea during 2019, marking the sixth year in a row that at least 100,000 arrivals were recorded on three Mediterranean Sea Routes. According to IOM, that figure is slightly lower (5% decline) than total arrivals in 2018 when 116,273 men, women and children crossed into Europe using the same routes.

Recorded deaths (which do not include unconfirmed shipwrecks or “ghost boats”) saw a decline in 2019 to 1,283 individuals- approximately 44% of the 2,299 deaths confirmed during the same period in 2018.  Since 2014, a total of at least 19,164 migrants have perished in the graveyard that is the Mediterranean.

Notably, the Mediterranean’s central route between North Africa and Italy (the most utilised by Nigerian migrants endeavouring to reach Europe via Libya) remains the deadliest passageway, as has been the case since 2014.  Researchers estimate that 1 in 33 died in 2019 using this route.

IOM estimates that there are currently 636,000 refugees and migrants, mostly from neighbouring countries and sub-Saharan African, in war-torn Libya, which continues to serve as a gateway.  Many see it as the point of no return, as they have suffered too much there (torture, rapes, starvation, domestic servitude and gross violation of their human rights) to turn back to their conflict-torn, poverty stricken, economically depressed countries.  So far this year, nearly 1,000 of them (including 136 women and 85 children) have been intercepted at sea and forcefully returned to Libya in violation of international law.  According to IOM, the majority of them were taken to detention centres, where human rights violations, unhygienic and inhumane conditions are rife.