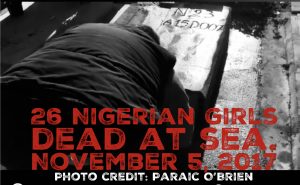 SALERNO, ITALY.  Prosecutors in Italy have investigated the death of 26 Nigerian women, most of whom were teenagers between the ages of 14-18, who were found dead at sea on or about November 3, 2017.  Their bodies were recovered, along with 375 other migrants (most of whom were from sub-Saharan Africa), by the Spanish warship, Cantabria, in the Mediterranean Sea, amidst suspicions that the women had been sexually assaulted before they were brutally murdered after leaving Libya. Five of the 375 survivor migrants who were rescued along with the recovered bodies of the young women, are being questioned by Italian authorities in Salerno, Italy.  Two arrests have now been made.  Of the 375 migrants rescued, 90 of them were women, eight of whom were pregnant. It is noteworthy that 90% of female migrants report violence, starvation, torture and/or rape by Libyan militants and various gangs on their journey.

Subsequent autopsies revealed that most of the 26 dead women died as a result of drowning. Only two of the victims, Marian Shaka, who was married, and Osato Osaro, were identified.  Both were 20 years old and pregnant, one in her fifth month and the other only six weeks.

On November 17, 2017, a mass funeral was held in Italy for the young women.  The unidentified women were buried with a simple white card stating the number on their coffin, which each contained a picture and an information card with copies of dental scans and a list of traits (like tattoos and/or scars).  According to Italian authorities, they will be buried in Italy, not Nigeria, where they could possibly have been identified through DNA evidence.  As such, it is unlikely that their family members will ever know what became of their loved ones.

In 2016, approximately 11,000 Nigerian women successfully made the treacherous journey from Nigeria to Italy, crossing both the Sahara Desert and the Mediterranean Sea (International Organization for Migration- IOM).  It is estimated that double, if not triple that number, unsuccessfully attempted the journey.  Many remain in detention camps in Libya, uncertain of their fate. (CNN recently confirmed what IOM has been reporting for several months, i.e., that African migrants are being offered for sale on auction blocks in Libya.)  In addition,  Doctors Without Boarders, which maintains a rescue mission on the Mediterranean Sea, reports that 70% of all single women they rescue at sea are from Nigeria.  According to IOM, in 2017, a total of 114,000 migrants have reached Italy by sea.  More than 2,700 of them have died or are missing.

The unfortunate reality is that young women will continue to illegally migrate from Nigeria to Europe, even knowing the risks, until Nigeria presents them with alternative, viable and sustainable economic opportunities.  This is precisely why at Pathfinders, we utilize an interdisciplinary approach which incorporates both a human rights and an economic development methodology as part of the solution to sex trafficking.  Our ultimate goal is structural transformation in Nigeria, i.e., moving Nigeria from poverty reduction to wealth creation.  We see our survivors as part of the solution.  Moreover, we consider our survivors leaders because of their drive, their grit and their determination. We strive to help them create an economic brand that becomes their new identity, as they navigate from victim to survivor to business owner and then advocate.

To find out how you can support our efforts to end the scourge of sex trafficking from Nigeria, please email us at info@pathfindersji.org.